He who dies with the most corolla’s wins

A tale of a man and his new car.

It was a pleasant 28*C in Sydney airport when I met up with Clint, the owner of an AE86 which I was extremely keen on purchasing. He was a very humble man, and I could tell straight away that he had an obsession with these cars as much as I do. On the traffic packed trip back to where the car was stored, we chatted about our previous cars, current cars and cars we would love to one day own. 45 minutes later we arrived at his house, where I could see my next car for the first time in the flesh. I was ecstatic. As Clint went through and showed me the car, I couldn’t stop smiling and I thought to myself this is worth every penny. I handed over my money willingly and we finished packing the car up with extra oil, water, tyres and parts ready for the 14.5 hour drive home. I pulled out the driveway, waved goodbye and I was off.

Immediately I got lost, taking a wrong turn into suburbia, but thanks to google maps I found my exit and got onto to highway. Driving along I was extremely cautious because even though it is only an AE86, it is still a considerable amount bigger than my AW11 which I am used to driving. While playing with all the switches and becoming comfortable with my new ride, I realised I was almost out of petrol. I parked next to a bowser and that is when I had my only hiccup of the entire trip, I couldn’t get the fuel cap open. After many attempts I finally got it and filled up the car.
Armed with 2 red bulls, 6 no-doze tablets, 3 litres of water
and a Rammstein CD I found in the glove box I set off into the night.

I have never been to Sydney before and was quite amazed at how busy it is, 4 lane wide highways and still difficult to change lanes. I was coming up to my first toll booth and hearing that they are well maintained roads I was intrigued to see if this was true. If you are wondering, yes it is.

Barrelling along the highway I soon found myself a long way from where I started, still full of energy I continued on past Yass and through Wagga Wagga where I met a very intoxicated fan. He told me he had never seen a coupe before and thanked me for topping his night. With a smile on my face i dropped the clutch and single pegged down the street waving goodbye. I got all the way to a town called Narrandera which is the start to the notorious Hay plains and decided to get a few hours sleep before tackling the monotonous road.

Awaking to a kookaburra laughing in a tree above me, I decided to have a check of all the cars fluids. Everything was perfect and gave me the utmost confidence in my purchase.

The sun was still rising when I continued my journey home, and after so much driving by myself I was starting to go crazy, talking to myself, making stupid sounds, and head bopping to
“We are living in amerika, amerika is wunderbar”
I was really looking forward to being able to walk around, and talk to someone besides myself. 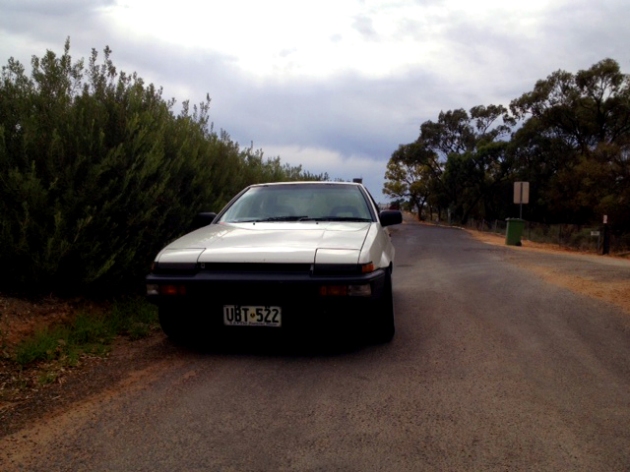 It wasn’t until I crossed the border into Victoria did I see any police cars and having one pull into a servo as I was refuellingk was quite unnerving. He had a look at my car from his bowser but seemed more interested in talking to his friend than ruining a so far excellent road trip. Thank god!

I crossed the border into SA and I was really determined to get back home without stopping. Having put SA plates on the car I felt more vulnerable in my own state than across the rest of Australia. I drove foot down, eyes up the entire way home and when I turned into my street a great feeling of accomplishment came over me. I was home, my beloved AE86 was home and I could stand back and admire her without any time restraints! My 86 life starts again here and I could not be any happier!

Words And Pictures By Josh

Why are you even reading this start watching 🙂