Today’s show is bought to you by the letter D for double defect!

What a day, i had the Derty Wun booked into Regency park for its full inspection to clear the defect  it had gotten for an out of date gas system.
I had booked a day off work to tidy up the last few items before its inspection at 3:00pm, this included new plugs, tyres for the front, new air filter, better steering wheel and a general once over to look for things up and make the car presentable.

First things first a sleep in was in order because i dont get many of those, so at about 10:00am Big Mike came over to help motivate me and we shot down to the shops and tyre changer.
I hadnt planned to change the plugs over but the car was becoming a little hard to start and i can see why this was probably the best plug that Big Mike removed from the engine for me.
We then fitted the remaining parts and went off to clean the car at the car wash. i hadnt budgeted much time for a clean up of the car but forgetting that it was school holidays every single father in the state had his small family washing the family car with him. This meant that we spent nearly an hour at the car was with only a mediocre clean, off to regency we went!

So it began, they failed the car within 5 minutes (non-working windscreen washers) of me being at the inspection which i had fully expected some of the items they had listed i was happy to replace. Although as usually they wanted me to fix some questionable items, drivers side seat belt had a twist in it and they wanted that removed, rear speaker loose (after being punched from under the parcel shelf i might add! full list below. Most of the items where just 20+ year old car things so no bad blood there. 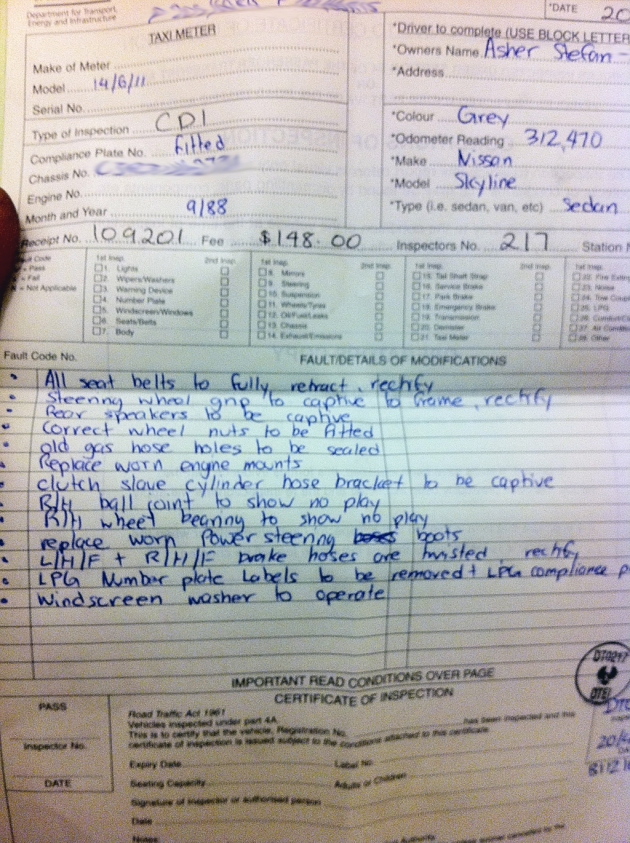 So after a 50 minute inspection i was handed another defect  and sent on my merry way !

So ive made another booking for Wednesday next week and i WILL get it through.
At this point i would just like to mention that ive had the car only 32 days and i couldn’t of made it this far so quickly with out the help of

and my neighbour that made the noise complaint to the EPA!

Thank you all so much for your help

7 responses to “Today’s show is bought to you by the letter D for double defect!”